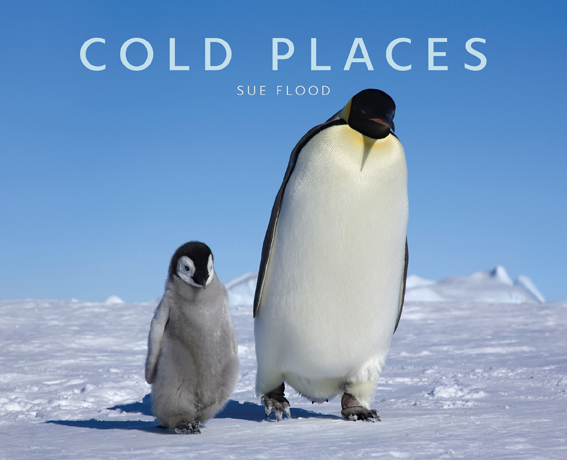 This is both a book of some of award-winning photographer Sue Flood's favourite images and a record of some of the most spectacular places and memorable animals of the polar regions. Sue was delighted to have it picked as Lonely Planet magazine's "Book of the Month".

Sue fell in love with the Canadian Arctic on her first BBC filming trip there in 1998 and has since enjoyed more than 30 trips to the polar regions working on documentaries and feature films, guiding private individuals and on expedition ships voyaging to the North Pole and south to the Antarctic Peninsula, Ross and Weddell Seas and sub-Antarctic islands.

She has had some great adventures in the polar regions, including camping on the floe edge with Inuit hunters in the Canadian high-Arctic, watching polar bears hunting, diving with leopard seals in the Antarctic, working on Russian icebreakers and sailing across the Drake Passage on a very small yacht. Sue is passionate about what she does, and she hopes that this comes across in her images so that people will be inspired to want to protect the wildlife and ecosystems she has been fortunate enough to photograph.

Cold Places was recognised in the 2011 International Photographer of the Year contest, winning third prize in the Nature Books category.

The foreword is by the Hon. Alexandra Shackleton, grand-daughter of the famous explorer, Sir Ernest Shackleton, with whom Sue had the pleasure of travelling to the Ross Sea.

"It’s an almost impossible task to choose a favourite image from Sue’s portfolio, but the emperors on the cover bring back memories of sitting on the ice watching the penguins walking slowly past with their utterly appealing chicks with their air of optimism. Sue has captured their spirit completely and with artistry, and I now have a copy of one of her pictures hanging in my house.
A most impressive book." - the Hon. Alexandra Shackleton

Cold Places was reviewed by author and photographer Nick Smith in the Explorers Club journal:

There’s something about an occasional stint in the Polar Regions that will bring out the photographer in all of us. But for Sue Flood, if it’s a cold place then that’s her territory. As an artist with the camera, Flood has a terrific eye for what makes the extremes of the ice domain so appealing, dangerous and poetic. She captures these landscapes, and the animals and people that inhabit them, with a clarity of vision and excellence of technique that most photographers simply don’t have.

There are two main reasons for this. First, having served an 11-year stint at the BBC’s Natural History Unit as a documentary producer, she has the recording of wildlife imagery in far-flung places in her blood. Second, she spends more time in the arctic and Antarctic regions than she does in her temperate homeland of Great Britain.

This combination of knowledge and opportunity come together in her superb debut coffee-table tome – ‘Cold Places’ – a book where, try as you might, you won’t find a single dud image. Whether she’s exploring super-wide open vistas populated by a lone bear or leopard seal, or whether she’s up close and personal with blizzard beset gentoos or towering nuclear-powered icebreakers, Flood gets under the surface of all her subjects. The results are superb.

Her key strengths are iconic images that interpret the colours and moods of the earth’s extremities. To do this you need real dedication, attention to detail and an uncompromising approach to quality. These attributes are passed down the line to the production values of a small, but almost perfectly formed book, and we can look forward to seeing many more of her awe-inspiring images in the future.

Please be advised, VAT is not charged on books.

Sorry, there are no reviews yet.