A Essential Guide to Understanding Depth of Field

Depth of Field (or DoF for short) is an aspect of photography that everyone should understand in order to get the most out of each photo they take.

Join Clifton Cameras as we get to grips with DoF and how you can use it to enhance your images in next to no time:

The lens of every camera can only focus on a single point, though there is an area that stretches both in front and behind this focus point, that still appears sharp. This zone of acceptable sharpness is the DoF.

It is important to note that DoF varies from photo to photo — there is no fixed distance. Instead, there will be images that have small zones of focus, otherwise known as a shallow Depth of Field, and other images that will have large zones of focus, with this defined as a deep depth of field.

Why is Depth of Field important?

Both the aesthetic and technical quality of a photo is affected by Depth of Field, making this one of the most important tools available to a photographer.

To put it another way, by understanding the parts of a picture that you want sharp, and the parts that will be more effective being out of focus, you will have a vital artistic tool for establishing breath-taking images each and every time.

Factoring the Circle of Confusion into understanding Depth of Field

The concept of the Circle of Confusion (which can be shortened to CoC) comes into play in relation to DoF, as this is used to determine how much a point needs to be blurred for it to be perceived as being un-sharp.

At the point where the Circle of Confusion becomes perceptible to our eyes, a region that is defined as being outside the Depth of Field is established, which can no longer be called ‘acceptably sharp’.

As ‘focal length’ refers to the capability of a lens to magnify an image of a distant subject, it stands to reason that you will get a shallower Depth of Field the longer you set your focal length.

It’s important to bear in mind that the total DoF will be virtually constant. This is illustrated in the following table, which has been provided by Cambridge in Colour, when depth of field was calculated at f/4.0 on a camera that had a 1.6X crop factor. The circle of confusion, meanwhile, was set at 0.0206mm.

While the total DoF is just about constant, both the fraction of the Depth of Field seen in front and behind the focus distance will change significantly depending on focal length. This can be seen by analysing the table below, again compiled by Cambridge in Colour: 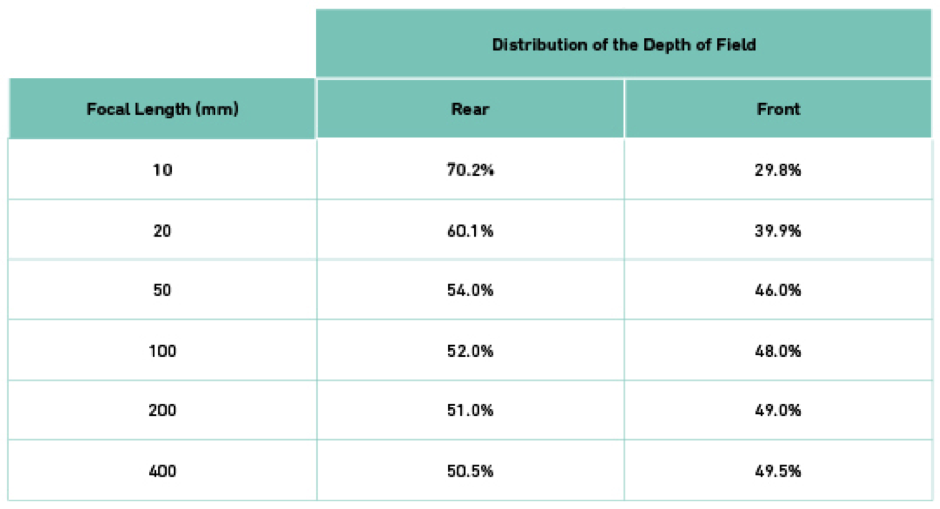 Aperture is the feature on a camera that controls the amount of access provided to light from its lens, through to the device’s sensors. Altering the size of your camera’s aperture changes the Depth of Field available on an image in the following way:

Use a large aperture to get a small f-number and thus a shallow Depth of Field.

When to use different Depth of Field variations

As we have touched on a couple of times so far in this guide, shallow DoF and deep DoF are variations of the technique as a whole. So when is the best time to use each one?

The times to use a shallow Depth of Field

A shallow Depth of Field is ideal when you are looking to make a subject stand out from its background. Therefore, apply it in the following scenarios:

The times to use a deep Depth of Field

Use a deep Depth of Field in scenarios where you don’t have a specific subject that you’d like to focus on and would rather put attention on as much of the scene before you as possible.

Landscape photography is a key example here, and by using a deep DoF, you’ll be able to get much more of the scene in focus.