I was recently given the opportunity to review three comparable pairs of Binoculars, all quite new to the market and all within a fairly similar price range, all 10x magnification and all with a 42mm objective lens. The trio consisted of Leica Trinovid HD 10x42, Kite 10x42 Bonelli 2.0 (no longer stocked, please see our range of binoculars here)and Nikon Monarch 10x42 HG (Monarch's now discontinued - find our current Nikon Binoculars here). I purposely didn't look at the prices until I had a good feel for which of these three was my personal favourite.

I was quite excited as I unpacked the box of goodies and as soon as I saw the brands of optics I had been handed I thought immediately that the Leica (having owned an original pair of these famous bins for many years and still keep these as my office bins!) would be my favourite, probably followed by the Nikons and then the Kites as I had no knowledge of this brand at all.

Here’s how I faired with all three models, I will start with the most unfamiliar brand the Kite Bonelli’s (there’s a bird called a Bonelli’s Eagle, presumably where the name comes from?).

At first glance, I thought these looked a bit clunky and heavy but I was pleasantly surprised as I picked them up, nice and comfy in the hand and although they did feel heavy - at 840g are 40 grammes heavier than my own Swarovski 10x42s and the heaviest of this group - it was quite a sturdy, reassuringly heavy feel. Testing these binoculars in the field the image was crisp and very bright but I could detect a slightly blue hue at the extreme edge of the field of view. The focusing wheel has a smooth movement, if a little too smooth, difficult to find that 100% sharp image quickly, it seemed to take many turns to get from near focussing to far focussing, something birders need to do quickly as birds can appear at near range as well as long-range. The Kite Bonelli have the closest focusing of the three and I was almost able to focus on my feet with little distortion, a great asset when watching butterflies and dragonflies. As I watched the local Buzzards settling down to roost after sunset the light gathering capability of the Kite Bonelli was very impressive.

Overall I was very impressed with the Kite Bonelli 2.0 and was pleased to see other companies around the world are catching up to the big boys in terms of light capture and image quality.

“These have to be the best,” I said to myself as I unpacked the Leica box, inside I found a new strap/case with which these binoculars are supplied, an addition which I found a little ‘fussy’ for my birding, it’s a kind of carry case made of neoprene which unfolds out into a strap or harness, perhaps good to protect your optics but I have to say I prefer the standard strap. In the hand (without the strap) the binoculars feel very comfortable, smooth, snug and ergonomic and at 720g the middle of the group in terms of weight. In the field, they generated a super crisp, super sharp image with no detectable distortion at the extreme edge. Field of view is very important to birders as you need to see as much as possible in your view when looking across the large expanse of the estuary, for example, however with the field of view being just 113m at 1,000 metres unfortunately the Leica provide the smallest view of the group. At close focus, I could get to within about 1.5 metres away, not as close as the Kite and in low light conditions the light capture was as I expected - excellent.

I wasn't surprised by the superb image quality of these Leica's and they are very comfy to use, sitting very neatly in the hand and was happy to see that Leica do still pack a punch in the binocular world, just the carry-case-come-strap was not for me.

I have an old pair of Nikon I keep in the car for emergencies and I recall they were quite cheap and the quality reflects that, so when I first picked up the Nikon I wasn't expecting much. At 680g these are the lightest of the trio and also the smallest at just 131mm (Kites 156mm, Leica 140mm) very neat and compact. When carried around the neck the weight difference was quite apparent. I took these Binoculars to our local lakes and was amazed at the image quality which was almost comparable to the Leica if just a tiny, tiny bit less sharp, compared side by side image quality was very, very similar. The stiff focus wheel might put some users off but I like to feel a bit of resistance when focussing and with only 1.5 turns of the wheel will take you from near focusing to far focussing I found these Nikon the easiest to use when following a moving bird from the foreground to the distance. The image quality really was ‘edge-to-edge sharp with no distortion at the extremes thanks to the new ‘image flattener’ and ‘extra-low dispersion glass’ (whatever that are!) the colour fidelity seemed to be the most realistic of the three, including in low light conditions. At 121m at 1,000m the field of view provided by the Nikon was the biggest of the three and quite noticeable in the field. The close focus was only achievable to around 2m, the least close of the three but still pretty good, most things making a run for it once you get closer than 2 metres! 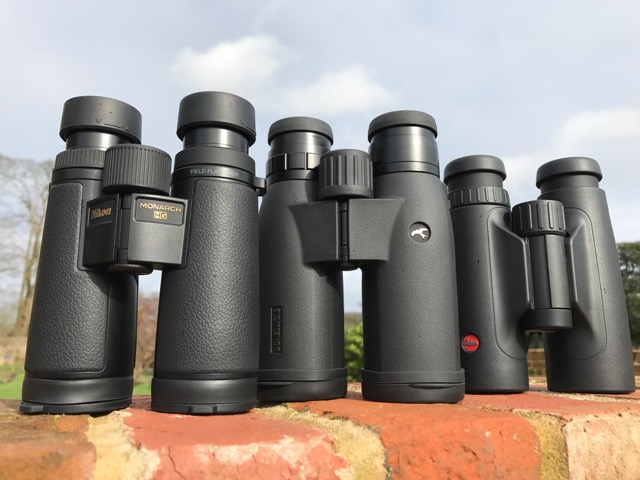 Overall I have to say I was really quite impressed by these new Nikon bins. Quality of image and the widest field of view would make these a very good choice for any birder.

Side by side these binoculars are all very impressive, what I found probably most impressive was the brightness and image quality of the previously unknown Kite Bonelli, the Leica’s are great - as I would have expected and probably the comfiest in the hand (without the strap!) but for me, the overall winner is the Nikon Monarch HD for quality of image and ease of use for birding thanks to the biggest field of view, behaviour in low light and quickest focussing.

When I looked at the prices of these optics I found that my favourite came in mid-range at £839 compared to the Leica at £799 and the Kite at a rather hefty £1,049.

My first ever binoculars were the classic Carl Zeiss Jena 10x50s - heavy, cumbersome and looking back, not that good. They worked fine or so we thought at the time, now we have new prisms, lens coating technologies, image flatteners etc and the quality of many top models is becoming an increasingly close race, it was great to be able to compare these three good models and would urge anyone considering a new pair of Binoculars to ‘try before you buy as the differences are becoming so slight and nothing beats trying them out for real, what sits comfy in one person’s hand wouldn't in another’s, so go and try them!