Skomer Island is famous for its 30,000 strong population of seabirds including Puffins, Guillemots, Razorbills, and half the world's population of Manx Shearwater. The island is surrounded by a marine nature reserve and is even home to an endemic species of vole.

What wildlife photography kit did I bring to Skomer?

How to capture a photo of a Puffin...

Having been to the island before I knew what to expect; thousands of incredibly photogenic Puffins perched at the edge of cliffs waiting to be photographed. Their abundance may make them a seemingly easy target but many people may underestimate how small and fast they really are. The Puffin's speed and size make it tricky to get a photo of them in flight. What makes it even more challenging is when you are determined to get a Puffin that has captured sand eels for their young.

Fortunately, I had the right equipment with me. My Canon 80D may not be the quickest on the market but pairing it with a Canon 70-200mm f2.8L IS II and 1.4x extender made for a great wildlife shooting combination.

One of my goals for the trip was to photograph a Puffin in flight bringing sand eels back to its young, this was incredibly tricky due to their small stature and agility but I did manage a few shots with the right settings.

What settings should I use for wildlife photography?

Keeping the ISO low (due to the bright conditions) I set about testing various apertures and shutter speeds. I knew my shutter speed had to be fast because the birds are quick, I eventually settled on 1/1250 which I found to be the best. I then set my camera to continuous autofocus, perfect for tracking moving subjects while panning.

Wildlife Photography Tip: Set the camera to continuous autofocus and choose one AF point as a crosshair 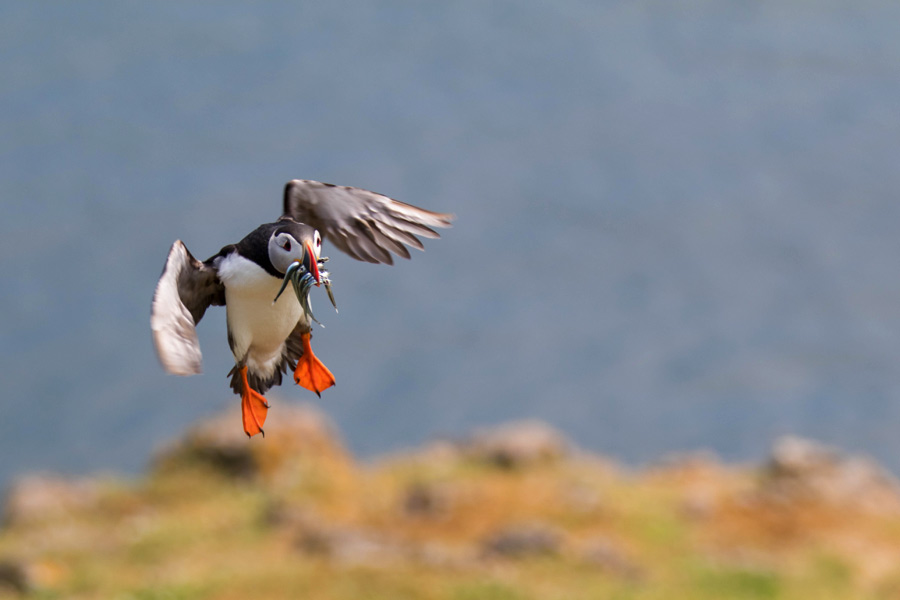 Once this photo was ticked off my list I was able to move on to the Puffins walking around on the ground, in and out of their burrows.

Puffins are endearing and loveable creatures but aren’t the most graceful of birds. They make clumsy landings by bouncing themselves off the ground with considerable force and frequently trip over their own feet. This makes for an entertaining spectacle between shots. Remember to observe the behaviour of the wildlife you're shooting, not only is it entertaining but observation will help you know when to ready your camera. Puffins when preparing to go out to sea will sit on the ground for quite some time before they leave to catch the day's bounty of sand eels allowing for great photo opportunities.

The below photo was taken at 200mm with an aperture of f4 to create smooth bokeh and highlight the focus on my subject. The shutter speed was set at 1/500th of a second (this likely didn't need to be so fast, but I wanted to keep the photo as crisp as possible at this focal length). 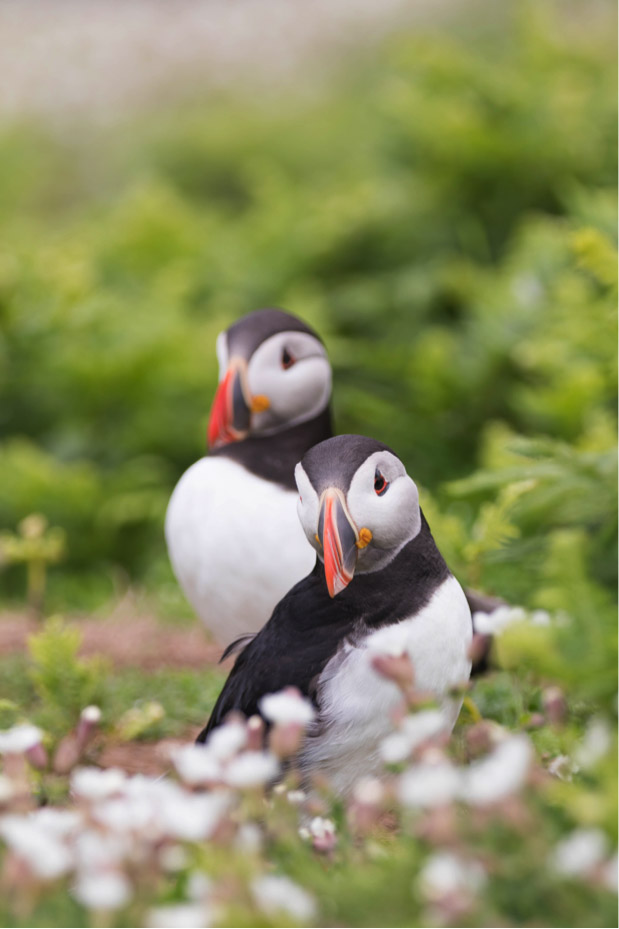 What other wildlife is there to photograph on Skomer Island?

Skomer Island is home to more than just Puffins, although they are the main attraction, another bird that I really wanted to capture was Short-Eared Owls. There are currently 5 breeding pairs of Short-Eared Owls on the Island meaning the chances of seeing one are quite high; Skomer Island covers only 1.13 mi2. I now know that the start of June is a great time to see them. The adults are more active collecting food for their chicks as they begin to hatch, usually, the menu features local Skomer vole.

Within 30 minutes of being on Skomer, we had a Short-Eared Owl fly by which was fantastic. The owl had a rodent gripped in its talons and landed in a patch of dirt surrounded by the last of the bluebells around 30 meters away. I moved quickly to take quite a lot of photos of this owl enjoying its lunch and then put my camera down to observe just before it took to the air again.

Although I did have to stand on my tiptoes to get a good view I was very happy with what I was able to capture. 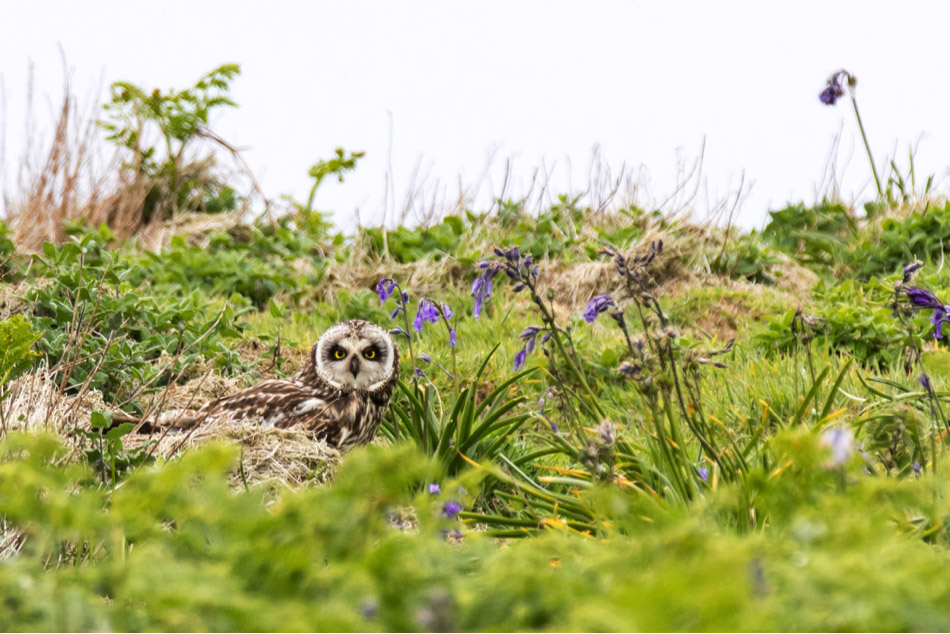 After two great days on Skomer, it was time to get the last boat back to the mainland. Whilst walking back we heard the hissing of owl chicks off to our left, having stopped to see if we could find them with the cameras we saw another Short-Eared Owl making a low pass scanning the ground for food.

I didn’t have much time to react, the settings for the below shot are 1/600 sec,  ISO 160 and  f6.3. This was taken handheld with the Canon EF 300mm f2.8L IS II and 2x extender, after looking at the shots I knew I should have cranked the shutter speed up more towards 1/800 sec or higher. 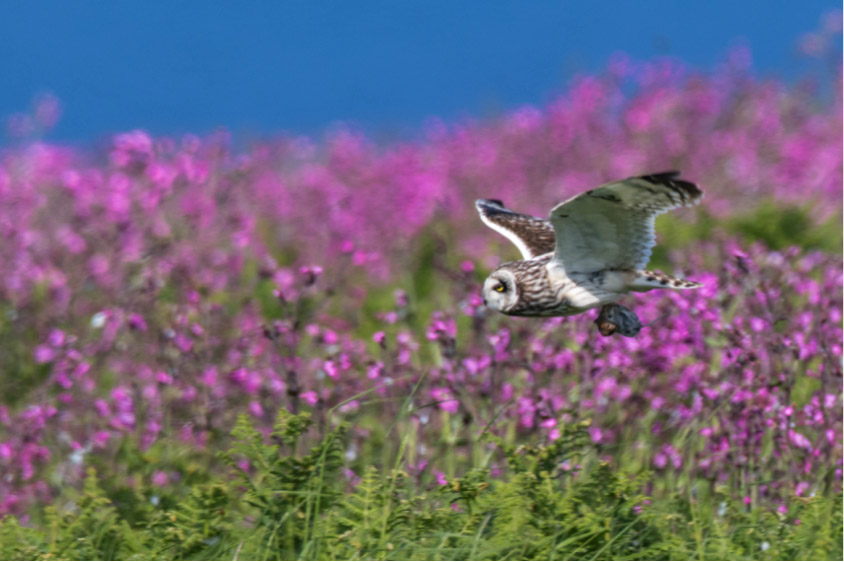 We felt lucky with this sighting as the Owl stuck around for a long time allowing us to get plenty of shots. It continued back and forth over it’s nest dropping in food for the young and stopping every now and again to eat something itself. I was eventually able to adjust my settings for a photo I was happy with.

I wanted to capture slight movement in the owl's wings so I set my shutter speed to 1/800 sec and because light conditions were very bright I left my ISO at 100 so as not to overexpose the image and eliminate unwanted grain. 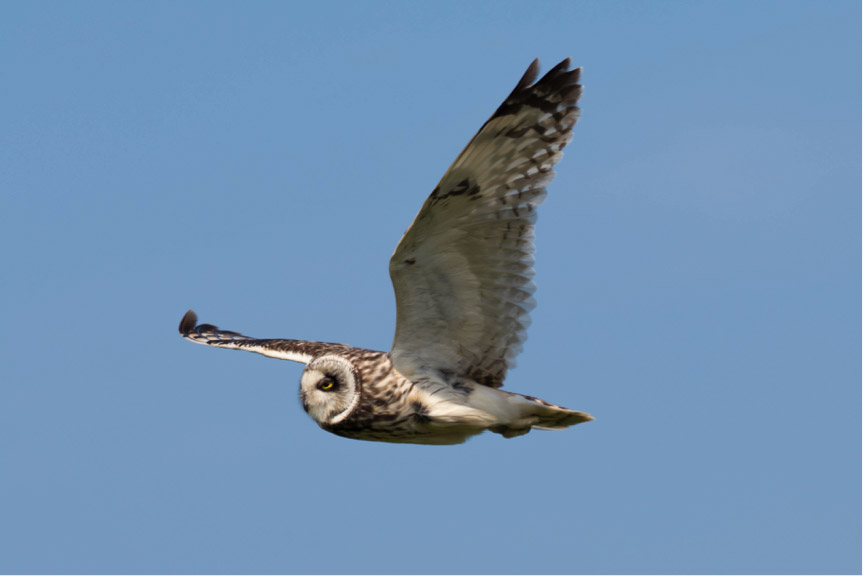 Skomer is worth a visit whether you have a smartphone or an expensive DSLR, you will always walk away with a great shot that you are happy with as the Island has bounteous wildlife and beautiful scenery.