Back in October, I had the absolute pleasure of trying the Fujifilm GFX50R in a studio setting. Since that day, I have always wanted one. So when the GFX100S was announced at a price closer to the GFX50 range but with the quality of the original GFX100, I was so excited to get my hands on it.

I mainly shoot in a studio, so in the past, mirrorless cameras have not been on my wishlist. Mainly because of having to change the settings by overriding the EVF, but also because I find mirrorless cameras to be quite small, and I’ve always been put off by that for some odd reason, personal preference. However, my opinion changed with the GFX range.

Please click on the images below to see the full-size version.

The first thing I noticed with the GFX100S was the size. It was significantly smaller than the GFX100. This also meant that it was lighter. However, it was still much larger than the standard mirrorless camera, and felt like a thicker version of my Canon 5D Mark III. That part didn’t make much of a difference for me as I tend to be lying on the floor or sitting down when I shoot. Who else is a “lazy” studio photographer? 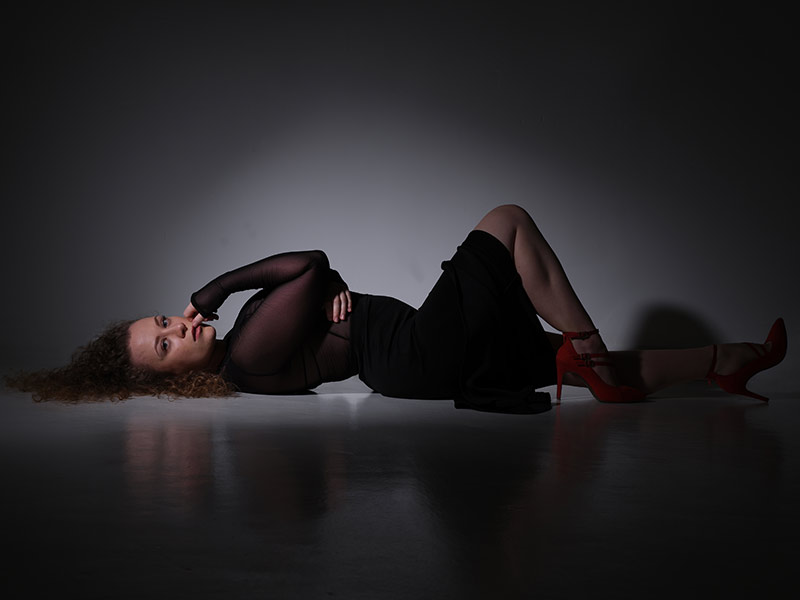 I decided to try and recreate a previous shoot that I had done back in October with the GFX50R, so for the first style, I shot using gel lighting, with my Broncolor lighting on F4.5 and F6.5 to create various levels of colours on the model.  I selected the same colours from the previous shoot, using red and blue. The background I kept white, and I even used the same wooden stool. Unfortunately, the model I had photographed last time was unavailable.

Settings in a studio tend to stay the same at between F9 - 11, 1/100 sec and ISO 200. Throughout the shoot, I used the Fujifilm GF 32-64mm F4 lens, which I find great for a mixture of headshots and full-body portraiture.

The 102MP really is the selling point for this camera. Obviously, the colouring found with Fujifilm was going to be great, but adding to the impressive 102MP, the images produced by the camera was excellent. The image quality compared to my Canon 5D Mark III was very obvious. A little less so when comparing the GFX50R but once I got the images into Photoshop, the image quality difference was visible.

The other thing I noticed was the autofocus and face detection. It was so quick! The issue (and joy) I have with working with so many models is that they enjoy moving around during photoshoots. When shooting with my Canon 5D Mark III, which is not the newest of cameras and certainly in a well-loved condition, this means constantly moving the focal point. All that work is taken away from me when using the Fujifilm as the face detection does it all.

In the second styled shoot, we used one light, with a honeycomb grid covering the Broncolor flash to create this really cool spotlight. I changed the angle of where I shot and with the GFX100S I brought the light much closer to the model to create a sharper contrast between the shadow, to slightly differentiate the photoshoot, but overall, I had a similar style.

In total, I was in the studio for around 4 hours, which is on the shorter side of my usual photography days with a model. Throughout that whole day, the battery life was not even in the back of my mind. I’ve always found Fujifilm batteries to be long lasting, but even with the continuous flash triggering and switching the camera off and on again while I played with the lighting, I never had to worry. I do always recommend having a few spares though. I’m sure everyone has had an incident where you misjudged the battery life.

Overall, The Fujifilm GFX100S is going on my Christmas list. It’s a great step up in regards to technology and certainly a spotlight camera in the medium format selection.