Astronomy. The study of celestial objects and phenomena. An increasingly popular pastime for both casual observers and serious enthusiasts alike, reflecting our fascination with the night sky and the countless heavenly bodies which reside therein.

Of course, it’s perfectly possible to observe the heavens with the naked eye and marvel at the starry spectacle but, for anyone looking to take things a step further, some sort of optical device is essential.

A binocular can serve this function to a certain extent but to enjoy the best views of the stars, planets and other celestial phenomena, a telescope is the ultimate observation tool.

And that’s where Celestron comes in. View the complete range of Celestron telescopes at Clifton Cameras here >

Founded in the early 1960s, the company knows a thing or two when it comes to the design and manufacture of optics in general and telescopes in particular. I was very pleased, therefore, to take delivery recently of the Celestron NexStar 8SE SCT.

Sporting Celestron’s signature ‘orange tube’ design, this is a Schmidt-Cassegrain telescope (SCT) which means that it uses a combination of lenses and mirrors to deliver the best images possible.

What can you see with the Celestron NexStar 8SE Computerized Telescope?

The mount contains a database of 40,000 celestial objects and is designed to locate and track said objects for you - which sounds useful, to say the least!

The 8SE sits at the top of the NexStar SE range, the ‘8’ in the product title referring to the diameter of the scope’s aperture in inches. The larger the aperture the more light the instrument can gather, the net result being brighter images and better resolution.

The Schmidt-Cassegrain design allows for long focal length in a comparatively short, compact body and when used with the supplied 25mm 1.25 inch eyepiece, produces a magnification of 81x. It’s worth noting that Celestron produces a range of eyepieces that will all be compatible with the NexStar, thus allowing the user to opt for higher magnification or a wider field of view depending on what is being viewed. 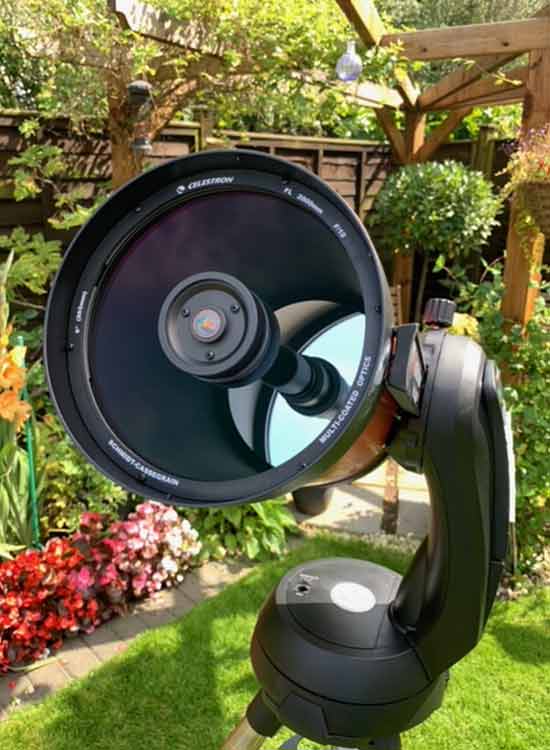 A telescope is a fairly delicate piece of equipment and I’m pleased to report that the NexStar arrived reassuringly well-packaged. Opening the outer box revealed an inner box. Nestled within this were several smaller boxes, each providing individual homes for the scope, tripod, fork arm and associated accessories. I like having lots of boxes to unpack. Apart from the reassurance it provides with regard to protection during transit it also makes the unpacking process feel a bit like Christmas - which, of course, might be the case, particularly if the scope has been purchased as a present!

First out of the box was the tripod. This feels like a really solid piece of kit. Which it needs to be, as a steady support is likely to be vital when observing the night sky. It’s also extremely quick and easy to set up as it comes out of the box pretty much pre-assembled.

Once the legs have been set to the required height it’s simply a matter of using the included spirit level to make sure all is level and then attaching the accessory tray which serves as a handy support for additional eyepieces and the like.

Having assembled the tripod, the next step was to attach the telescope itself to the fork arm. I have to say that this halted my progress for a few minutes. The supplied assembly instruction sheet uses colour photographs which are excellent. Only trouble was that the first image showed the scope already mounted on the fork arm. Celestron’s setup video showed the same so a period of head-scratching duly followed.

Upon further research, it transpired that the scope simply dovetails onto the fork arm. All the user has to do is loosen a single knurled knob, slide the scope on, tighten the aforementioned knob and hey presto!

With telescope and fork arm duly conjoined, it was a simple matter to dovetail the fork arm base onto the tripod base plate and lock firmly in place with the three securing knobs. The StarPointer finderscope and eyepiece were a cinch to attach and, with the physical setup complete, I now found myself looking at a fully assembled (and very impressive-looking) astronomical telescope setup. So far, so good.

As mentioned at the start of this post, the NexStar 8SE is a computerised telescope. It can be powered either by eight AA batteries or by means of an optional Lithium Power Tank which is reported to allow up to eight hours’ worth of viewing.

Once powered up, the telescope has the ability to locate and track whichever heavenly body is of interest. In order for it to do this, the next step is to align the instrument’s computer system to the night sky. This is something we will explore in-depth in the next blog post. Until then, happy stargazing!

You can read more on Celestron astronomy products here >